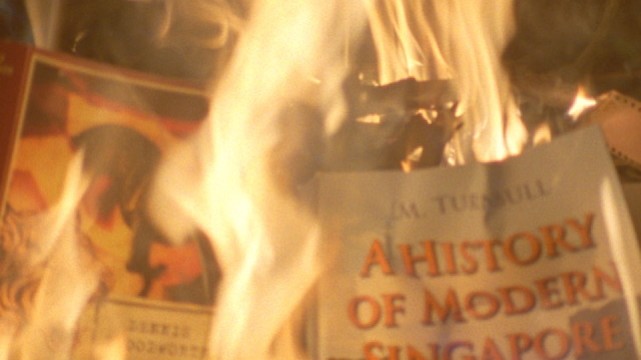 After SNAKESKIN‘s world premiere at DocLisboa one year ago, Senses of Cinema writer Jorge Mourinha beautifully described Daniel Hui’s second feature as “a hallway of broken mirrors that meld past, present and future” and “a literal collection of nested Russian dolls, a series of Scheherazadian psychogeographic tales that eventually reveal as its real subject the chasm between reality and memory, fact and fiction, history and myth.”

The film is composed of footage from Singapore in 2014 and viewed from the point of view of our narrator in the year 2066, becoming a reflexive meditation on film, memory and history’s narrative seams.

Crows & Sparrows and the Harvard Film Archive co-present the film on October 18, 2015. In the days before the event, Crows & Sparrows had the chance to interview Hui about his work.

You call some of your characters “players”, who perform the stories and memories of some real individuals who don’t appear in the film. Could you describe your process of collecting, writing, and recording these stories into strands of narration?

For this film, it started out with me. I was doing research, collecting stories, interviewing people etc. At some point I realized it would be much more interesting to get contemporary people to play characters from the past, because the film is a lot about how history survives (or doesn’t survive) in the present. I think it’s really easy to create this fossilized version of history, with interviewees who play fossilized versions of themselves. History becomes this thing to be admired and appreciated from afar, instead of how it actually is – being lived.

I’m curious – did you ever allow your players to improvise while in character?

As for the process, I started writing these thinly fictionalized versions of these real characters. But when I gave them to the people playing them (some of them were playing themselves), it was important for me that they turned these stories into their own. So they would rewrite (sometimes completely) my words, take things out and add things. For some of them, I would tell them the story in my head, and they would retell the story from their own imagination. So yeah, there was a lot of improvisation as well.

Your film conjures ghosts, describes the risks of time travel, and relays tales of being spirited away, all within the realm of documentary. How do you see these paranormal elements in your film in relation to feelings of closeness or distance to truth?

I think of genre as a perspective on things, so ‘fiction’ and ‘documentary’ are genres to me. These genres point more to the sets of rules that come with them – you can only film people and things in this or that way in a documentary or a fiction film, and I’m uncomfortable with these rules. Most of the time I want to film people the way I like, and it’s usually the same whether it is fiction or documentary.

I tried watching essay films as reference because I thought they would be similar in style, but it was actually pretty useless. They actually got me very stuck. So instead, I was watching a lot of film noir and reading a lot of crime novels. I guess I was relearning how to make a narrative film in many ways, so I was interested in seeing how these writers and filmmakers made their stories ‘move’ – how they get from one scene to another. Besides reading books for research, I was also reading a lot of Roberto Bolaño and Iain Sinclair, and maybe you can detect their influence. I love how their words are so amorphous – they can use words as documentary reportage, and suddenly they can shift to metaphor, exaggeration, and surrealism in the same sentence.

You’ve mentioned in a previous interview that it’s important to you to see how “history is embodied or disembodied” in the landscape of a place and in ourselves. Could you say more about how this interest influenced your pairing of the sound and image in the film?

Your producers on this film are Pedro Fernandes Duarte, Joana Gusmão, and Bee Thiam Tan. How did you come to this interesting Singapore / Portugal co-production opportunity? How did this creative partnership work?

I started the project with Bee Thiam, and he helped mostly during the preparation and shooting of the film. Joana and Pedro came in during post-production, because I was looking to do it in Portugal. Mostly, it works because we’re great friends and we love each other so much. I feel like we have a filmmaking family spread over three continents.

We created 13 Little Pictures mostly out of convenience – we were all independent filmmakers who faced trouble getting any grants because we didn’t have a production company with a strong CV backing us. So we decided to pool together all our experience and expertise – we helped out on each other’s films etc.

Are you working on anything new right now?

Yes. I’m working on an adaptation of a Dostoevsky novel, but it probably won’t resemble anything Dostoevsky wrote!

—
This interview was conducted by e-mail between Genevieve Carmel and Daniel Hui.
Learn more about the film and October 18 screening at the Harvard Film Archive here.